Taking time from his busy schedule shooting Cowboys & Aliens (as personal make-up artist to Daniel Craig) in New Mexico, Complections Advisory Board Member and Instructor Donald Mowat recently spoke to us about his amazing career and personal experience as Canada’s leading film make-up artist. With over 50 feature films to his credit, including 8 Mile, Repo Men, Max Payne, The Italian Job and The Other Guys, Donald has come a long way from being that young boy at the repertory cinema in Montreal. “I was fascinated by film,” he recalls. “I loved the period movies – the painterly look of them.” This passion for period film in particular led the young, artistically inclined student to study theatre and painting (he notes that originally he was interested in working in Costume Design), before eventually finding his calling in make-up artistry. “I started doing the make-up for all the actors’ portfolios,” Donald says of his drama school days. “But there were no make-up courses for what I wanted to do. I wanted to be a well rounded artist and not only do beauty.”

More interested in the realism of film, and the beauty of period pieces, Donald began working at a Christian Dior counter at Harrod’s in London, an experience which allowed him to work on “many faces.” Little did he know he would one day work on some of film’s most famous faces like Faye Dunaway and Oscar winner Sir Anthony Hopkins. Upon his return to Toronto, he assisted on his first film, and eventually began working on the Canadian production of Anne Of Green Gables; at this time, Toronto was beginning to make a name for itself in the world of film production, and Donald was there to make the most of this rising industry’s opportunities. “My name was getting out there,” he says. And becoming known for his approach of almost “anti-make-up” (making the performer’s look natural and not overly done), Donald became the go-to artist in the city.

But eventually the draw of Hollywood called, and Donald began working with actor Mark Wahlberg on films like Three Kings, Perfect Storm, Planet of the Apes, and The Departed. In fact, they’ve worked on a staggering 18 films together! “He decided he wanted to use me exclusively,” Donald says. “It’s a bigger deal for male actors to get their make-up done, because they don’t like it, and they need to trust the person doing it. It becomes very personal.” Donald has also lent his expertise to Eminem, Ethan Hawk and Keifer Sutherland. “There are some real gentlemen working in this industry,” he notes. “They are extremely loyal.”

Being so in demand within the industry has often led Donald to be working on one film while prepping for another, which was the case for the movie he’s currently working on. “I was working on Dream House,” he recalls. “And Daniel Craig asked me to work with him on Cowboys & Aliens. I began making notes in the script of all the pertinent details, and as soon as we wrapped, I could make the time then to meet with the director to talk about the direction of the make-up and costuming.” After some very successful camera tests last spring, production was ready to get underway. And so began another chapter in Donald Mowat’s storied career. Watch out for his next release, The Fighter, starring Christian Bale, Mark Wahlberg and Amy Adams – due out this winter! 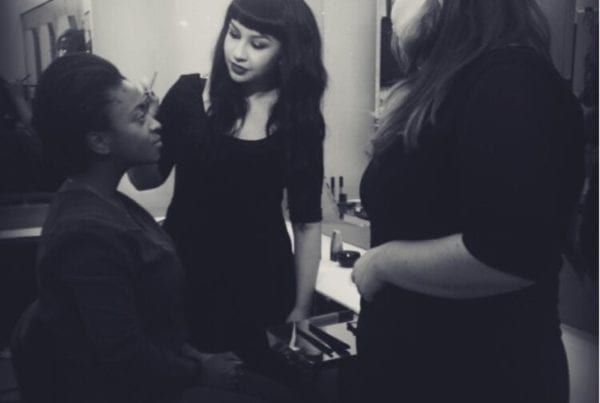